Menu
Log in
Register
Install the app
You are using an out of date browser. It may not display this or other websites correctly.
You should upgrade or use an alternative browser.

Just a Humble Dictator of Dumpsterdom

One Bad Announcement​
The flicker of the large screen in the middle of Times square flickered as the new appeared across the screen. Large amount of people looking up to see what has brought the sudden need for a broadcast across the screen. Others watching from home in the same confusion. As every channel had been tuned into the one station to help spread what may seem like devastating news. A woman appears on screen with a worried on her face. She took a moment before addressing the reason for this sudden new report.


"Today on March 26th, 2028, We encourage all citizens of the city of New York to remain inside. Board up all windows and stay hidden. Here at News 14, we are shocked to announce the kidnapping of our beloved mayor, Jeremy Stocks. The kidnappers have sent a link to a stream that is said to start in mere moments from now. We urge that all viewers' eyes beware for reasons if content may be too graphic for children. As a concern."
"You have been warned."

Screen goes black and all that is filled within the space is a large white number counting down from 10 to 9 to 8… till eventually….

3…..
2…..
1…..
0​
A video feed fills the screen with a man of early 40's seated in a chair. Beaten and bloody from some sort of prior violence he might have suffered. His head was turned down to the floor with his body sagging tied to the chair. Only the rope is what is keeping him from face planting onto the floor. With a spotlight over head Illuminating only that one particular area as if to hide whatever else behind them.

All is silent for a minute. Then two. Till suddenly tending to jump scare its audience, a masked face appears on the screen. The mask he wore was of a porcelain white skull with grayish colored metal form at the jaw. And the iris of his eyes was stalk white with a black pupil. They looked content and could draw others in with a simple stare. With a gray knitted hood to hide his hair that was connected to a darkish, almost black, gray jacket. His head moved side to side slowly as he began to speak. Making it look from everyone in Times Square perspective that he was looking out upon them. 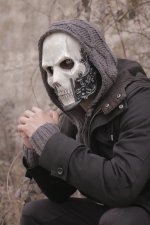 "Good afternoon, New York City. As you have figured out and been warned about, I have a figure of high standing in my possession. And I am glad to finally announce that it is true." He moves from the camera and holds out his black gloved hands in a grand gesture. "I give you ladies and gentlemen. Your beloved major, Mr. Jeremy Stocks. He has been quite an unresponsive guest and I'd like to announce that I've grown quite bored of his company. But before seeing our guest out. I would like to explain in detail. Why is this happening? Times have grown harsh in the city of New York and I'd like to see it in a new light. I've been hard at work with minor things set into motion that have led up to this point. The moment our guest has taken his leave. The city of New York will fall to its knees and the rise of your new Baron will take its place. Those who fight against this movement will unfortunately die but it will be as per example of the defiance against our grand cause. My men are ready and waiting in all areas of the city to move when the time has finally arrived." He walks over to the mayor, his form almost towering that of the limp mayors. He grabs the mayor by the hair and lifts his head. Then places one hand on the mayor's temple from behind then the other holding his chin. "Anything you would like to say, Mr. Stocks?"

The mayor with a small whimper and tears flowing from his eyes in fear says. "New York City please don't give in to him. Fight? For the future is no longer in my hands anymore."

He stepped back up to the camera and getting really close. A crazed look in his white eyes.